So, how did I end up spending 10 days in Jeju Island, South Korea?

Well, the backstory is that the South Korean government wants to turn Jeju Island into startup and remote work destination. There’s a lot going for it: excellent wifi, solid infrastructure, and beautiful views. It’s only about one hour from Seoul by plane, with more than 100 flights a day.

As part of their initiative, they wanted to organize a Digital Nomad Meetup on Jeju Island. To do so, they hired Youjin Do. Youjin is a documentary filmmaker, who interviewed my company’s founder for her project on Digital Nomads. She reached out to Automattic to find attendees for her meetup, and I decided to take her up on the offer.

I also dragged along my teammate Matt Perry. This was our Slack conversation:

And then a month later we were on Jeju Island. I only knew two things about Jeju before I arrived. First, I had read an article in Lucky Peach about the incredible population of local female divers who swim to the bottom of the ocean without the help of gear or tanks. Second, my female friends had raved about Jeju Island’s incredible volcanic face masks. That was about it.

I expected Jeju to be a tiny, rural place, but I was completely fooled by the “island” moniker. Jeju is roughly three times bigger than Singapore in terms of land mass. There are 600k permanent residents, which is about the size of Boston. Once we were there, it felt more like visiting a mid-sized U.S. city than a vacation island.

Youjin’s team put us up at the Orange Tree Hotel and Cafe in Jeju City, which was simple, clean and had excellent wifi. I actually ended up working out of their peaceful cafe/lobby many late nights (because of the timezone difference with my US-based team).

Matt and I arrived on a Friday night with zero plans, and decided to spend Saturday exploring. We learned that we traveled extremely well together because we’re both kind of “let’s go with the flow” kind of travelers. We ended walking to the other side of Jeju City to take the public bus to Seongwipo, a city two hours south. Tripadvisor told me the “Thing To Do” was to scope out the Cheonjiyeon and Jeongbang waterfalls. So, we did. 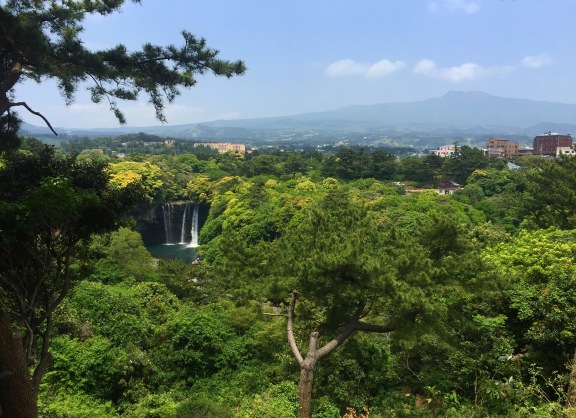 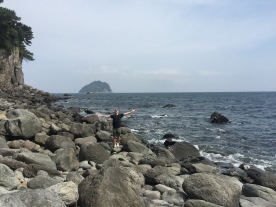 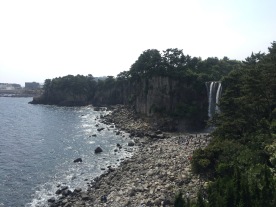 While looking for food, we found ourselves at the Seongwipo seafood market which was probably one of our favorite stops on the entire trip. There was an incredible array of fresh fish, food, and we ended up eating in one of the market stalls. There isn’t a lot of English in Jeju, so we made do with a lot of gesturing and pointing. 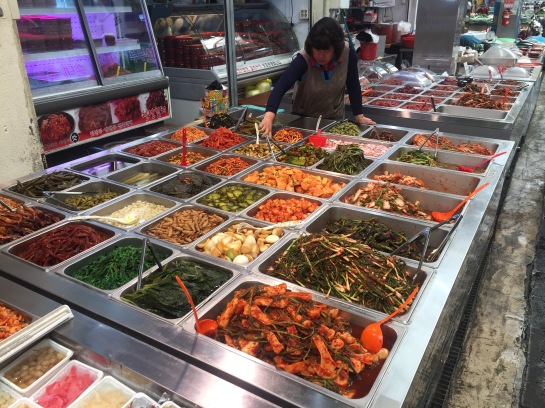 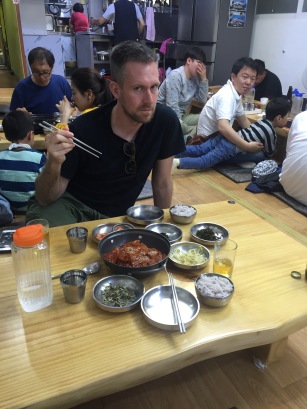 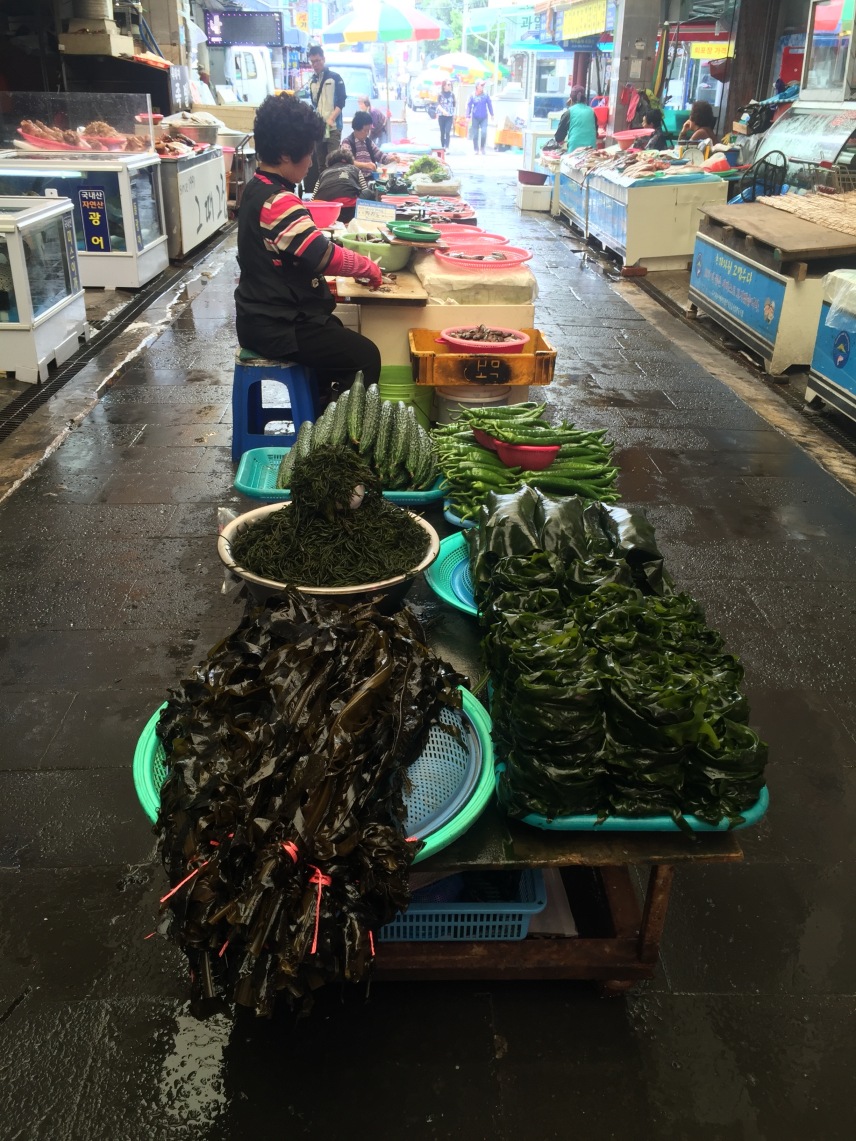 Thanks to Matt’s Lonely Planet guide, we also found out that the weekend we were there was Buddha’s birthday. A few locals pointed us to Yakcheonsa Temple, so we spent a few hours wandering the celebrations there. It was a pretty peaceful spot – a big, airy temple overlooking the ocean. 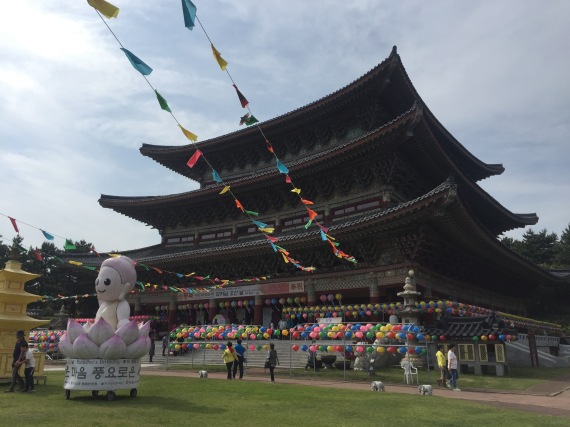 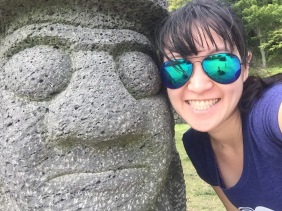 Me and Jeju Grandpa

Later that week, Matt and I met up with the rest of the digital nomad crew (will post more on this soon), and we went to the incredible Seongsan Ilchulbong (Sunrise Peak), which is a UNESCO World Natural Heritage site. It’s a tuff cone crater that is surprisingly easy to climb (it felt like it only took 20 minutes). Here’s the view from the sky:

And, here’s a view standing on top of the crater, looking back at the city. 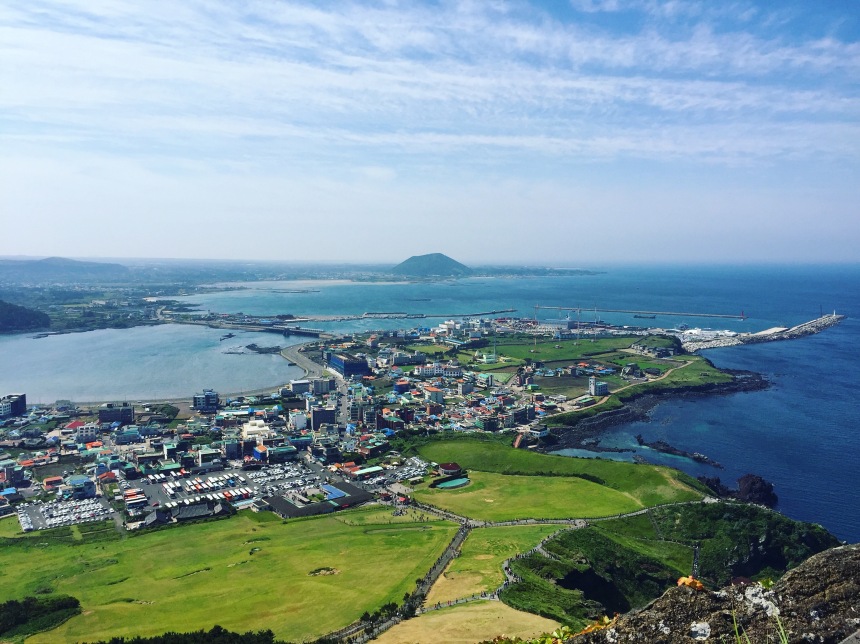 Of the many things we did, the most memorable to me was the food (of course!). Jeju City has three designated “food streets.” Black Pork Street, Raw Fish Street, and Noodle Street. Naturally, we had to try them all.

Black Pork Street was, hands down, my favorite. It’s Korean BBQ at its best: you start by wiping down the grill with lard, and then pile on sizzling meat. You put kimchi and veggies down near the drip-tray, so they’re drenched in flavor by the team you finish cooking. It’s also the perfect, shareable meal for a large, raucous group of digital nomads! 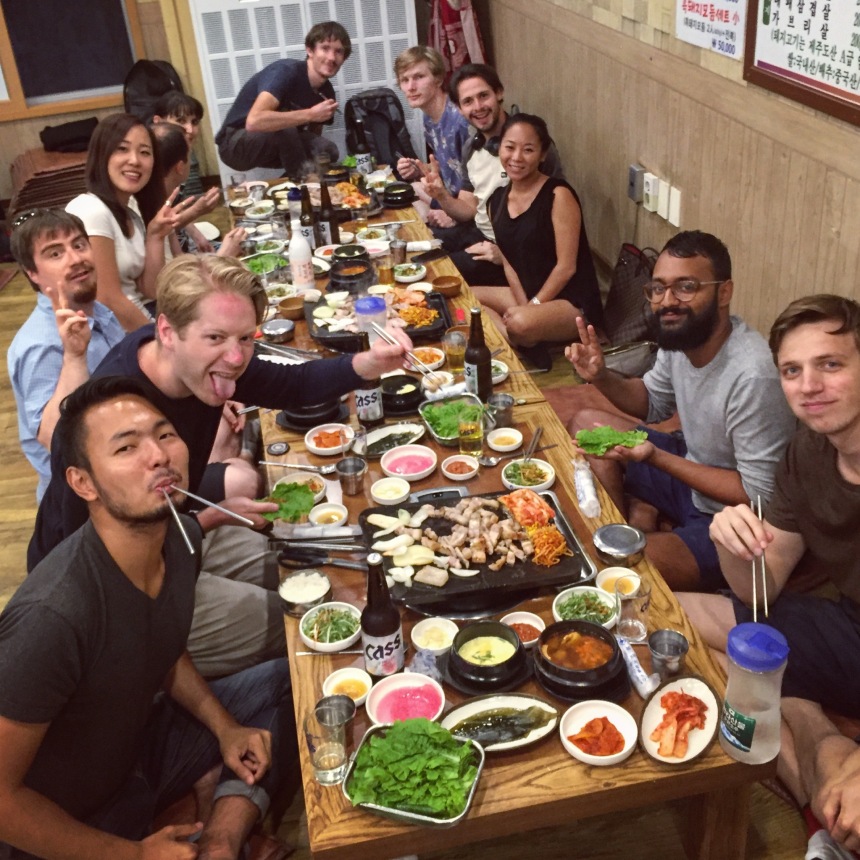 Noodle Street was Matt’s favorite. I wish I could have gone back a few times to try the various restaurants, but we made sure to visit the restaurant that was the “most recommended.” It featured chewy noodles with a rich broth – a very comforting meal after an exhausting 12-hour flight. 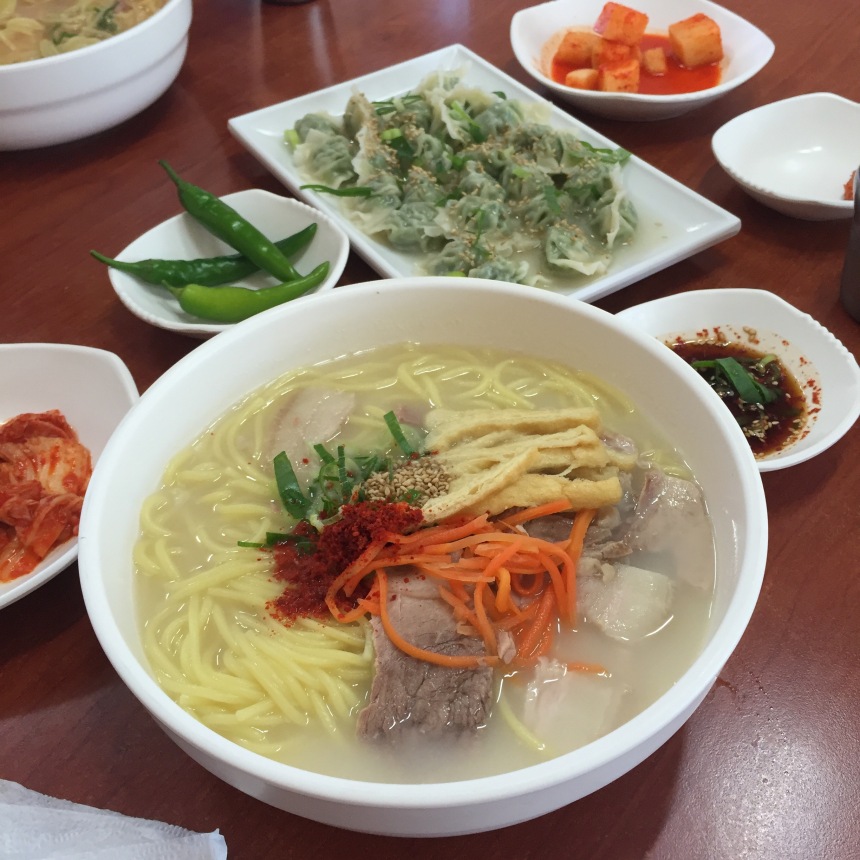 Raw Fish Street was the meal that required the strongest stomach, but was also the most fun. Everyone had to try eating something they’d never eaten before: abalone, conch, octopus, raw fish… all washed down with some light beer. I’d say it was a good bonding experience. 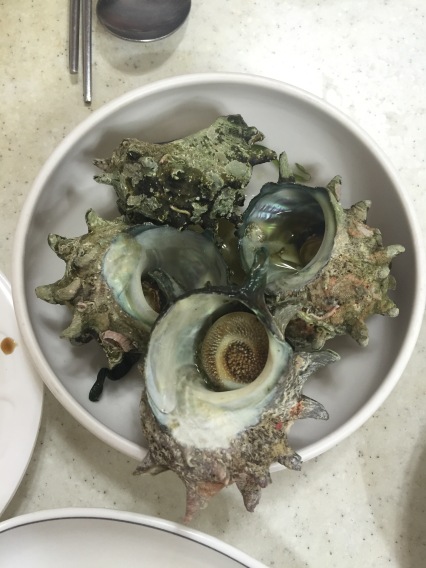 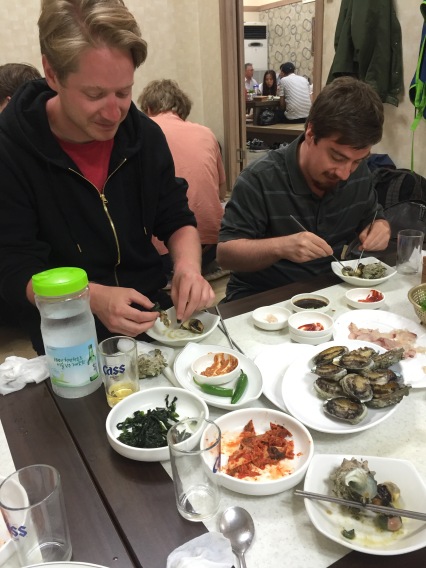 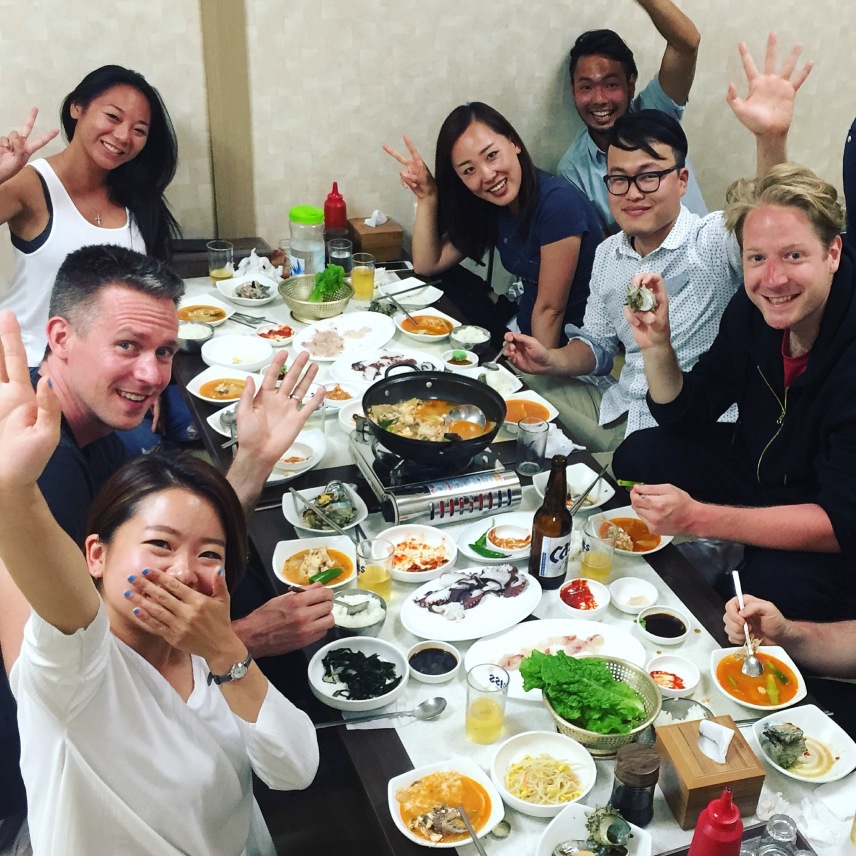 And this was just the sightseeing! My next post will be on the Digital Nomad Meetup, which was an incredible experience all on its own… stay tuned.

More reading: My fellow traveler Matt has some awesome blog posts of this trip.

3 replies to Walking (and eating) across Jeju Island, South Korea