Anway, my dad was thrilled when Theodore Racing invited him to watch this year’s Indy 500 as their guest. Since Indianapolis is between where my dad lives (Hong Kong) and where I live (Boston), I was allowed to tag along as the dummy who knew absolutely nothing about motorsports. But wow, what an experience.

This year was the 100th running of the Indy 500, which meant 400,000 people would be gathering for the largest single-day sporting event in the world. We spent the weekend with the Theodore Racing crew as they geared up for the event.

I truly loved meeting the Theodore Racing team, founded by Teddy Yip in 1976 and revived by his son, Teddy Yip Jr. in 2013. I learned a ton from the crew: David Kennedy, Victoria Lloyd, and Jacques Heckstall-Smith. Together, they manage the racing team’s operations – from sponsorships, to marketing, to driver management. In many ways, investing in a team or a driver is like cultivating a startup. It’s all about building relationships, finding investors, marketing your story, making tactical decisions, and hoping you put your bets on the right team.

For the Indy 500, Theodore Racing partnered up with Rahal Letterman Lanigan racing. This year, Graham Rahal would be racing car #15, 30-years after his dad and racing team co-owner Bobby Rahahl won the Indy 500 (USA Today has a nice editorial on the history here). In the many speeches Bobby and Graham gave before friends, family, and sponsors in the days leading up to the event, they kept reiterating how this was a family business to them. And I kept hearing similar stories all weekend – that people who worked in motorsports were pulled into it because they grew up around it. Everyone knew each other, and often, for decades.

Everyone also had the utmost respect for the sport. I was lucky enough to sit next to David Kennedy for much of the weekend, and hear about his war stories from his racing days. He told me that most racing drivers, especially from his era, would wake up Monday morning after a racing weekend, look up at the sky, and be grateful to be alive. It was an incredibly dangerous sport back in his day, and Bobby Rahal would say the same to me later that day. That more than anything, Bobby said he was happy he had both legs, his head intact, and he was able to watch his son race this year.

At the Indy 500, cars can go up to speeds of 230 mph. For the friends and family of Graham and Spencer Pigot (the two drivers from the RLL team), they know that each race day is a dangerous one. Shortly before the Indy 500, NYTimes interviewed Courtney Force, a drag-racer and Graham Rahal’s wife.

“We know what’s out there,” she said. “The monster’s always out there. It is out there, but you can’t dwell on it. I’ve always believed when the Good Lord wants you, he’s going to take you.”

Here’s a video of the racers on their practice run the Friday before the race. This was the first time I had ever seen racecars going 230 mph in-person. Being able to feel, hear, and see the speed was incredible. 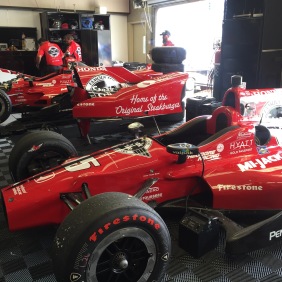 Visiting the garage. There are multiple cars they work on for various races. 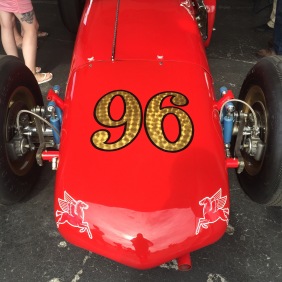 Watching the pit stop challenge was incredible! Crews were changing tires in 4 seconds.

Taping up the car before the start of the race. 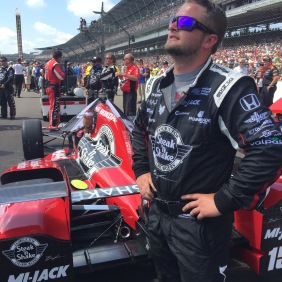 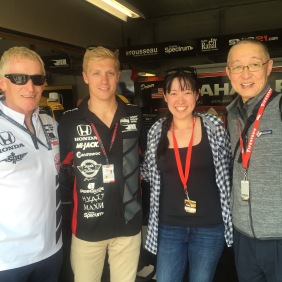 David Letterman saying a few words to friends, family and sponsors before the race.

One of the most important things I learned pre-race was what a team effort the sport really is. Good performance on race day is only made possible by the engineers, mechanics, crew, and driver working together and communicating seamlessly. At every milisecond they are monitoring the car, engine, speed, drag, fuel, tires, competitors, position… and many things I don’t understand. My day-job at WordPress.com VIP can be high-pressure at times, but teamwork and good communication is what makes a lot of what we do possible, especially in urgent and/or breaking news situations. Knowing how teamwork can be challenging made me appreciate how the mixed-expertise teams performed in stressful situations. On the Saturday before the race, the teams participated in a pit stop challenge to show off their crews. It was incredible to watch teams swap out tires in just about 4 seconds.

The morning of the Indy 500, my dad woke me up at 5:30 a.m. because he was already awake and excited. I grumbled and tried to sleep for an extra 30 minutes. We had to be in the lobby and ready to go at 7 a.m. for a police escort to the speedway. I’d never been a part of a police escort before, but it was an exciting and fast way to get to the speedway in the midst of 400,000 people arriving.

Actual race day was a blur to me because there was so much going on. I was mostly following Vicki and Jacques around, the two pros seemed to be unfazed by the madness and knew who everyone was, and where to be. Of the places we wandered to, the absolute highlight was standing on the grid before the start of the race. There were people as far as the eye could see, journalists and cameras everywhere, lots of ceremonial traditions and performances, and in the midst of it all, surprisingly calm drivers getting ready with their crew.

Watching the crew get ready.

Selfie on the grid before the start of the race.

Meeting David Letterman at the suite while watching the race.

Getting to watch the race with the Rahal Letterman Lanigan and Theodore Racing crew is an experience I will never forget. I camped out next to David Kennedy and Vicki so I could listen and learn as much as I could – this was my first race ever and I barely knew what to look for. Unfortunately, Graham came in 16th, and Spencer 25th. “It just wasn’t our day,” Graham said.

After the race, I got dinner with a few of my co-workers who lived near Indianapolis, and then we went out with the racing team for drinks. I don’t think I have ever gone out to a bar dancing with my dad until 1 a.m. It was definitely past his bedtime but he had fun.

And so did I! A truly unforgettable weekend.

More reading: Graham Rahal learns to speak Cantonese from the incredible Joey Kong. Also, Philip Newsome’s book “Teddy Yip, From Macau to the World and Back,” which can be purchased here.