After spending four days in Dubai, we were off to Abu Dhabi to meet up with my dad. He was there for work, which was the impetus for the entire trip. While Abu Dhabi might be a little sleepier than Dubai, it still had a ton of cultural highlights to offer. The first thing we did once we arrived was to Louvre Abu Dhabi, which had just opened a few weeks before.

“See Humanity In A New Light”

The architectural space of Louvre Abu Dhabi was jaw dropping. It had the ability to be both light and airy, while still grand and reverent. The feeling reminded me of seeing Sagrada Familia in Barcelona for the first time. We were among the first to see the space – the museum had just opened three weeks before. You could see that all the visitors were in awe: soaking up the space, listening to the echoes, staring at the light, and taking lots of selfies (me included). 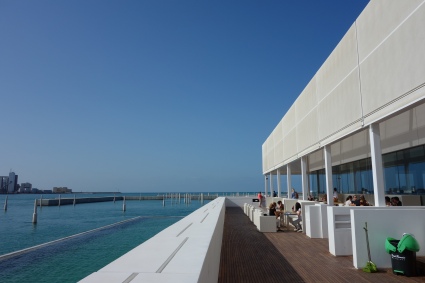 This ceiling structure created dappled light throughout the massive space.

You could sit right along the edge of the water. 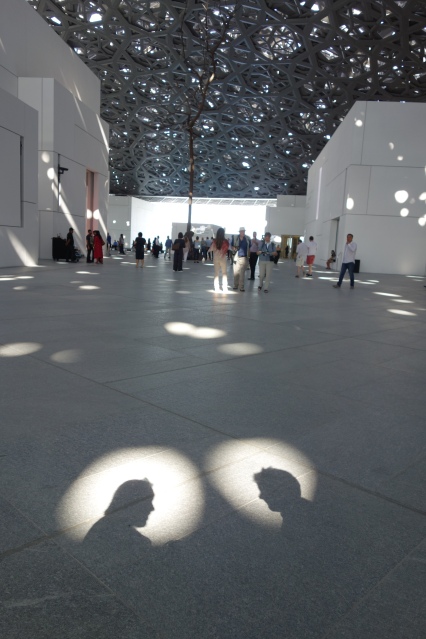 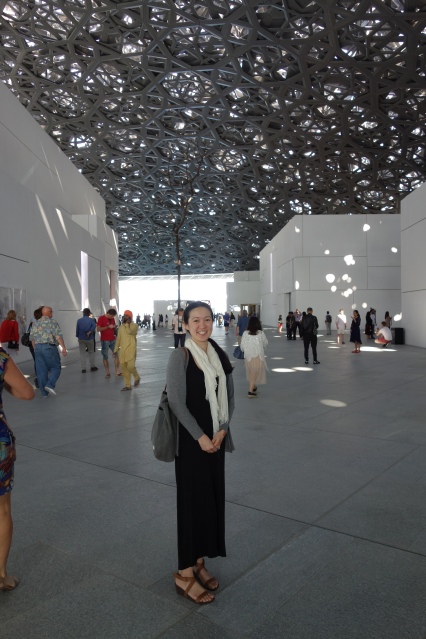 This space was so incredible I had to take a video for you guys… it opened 3 weeks ago. The light reminded me of Sagrada Familia (Gaudi Cathedral in Barcelona)… except floating on water.

I loved the storyline of the Louvre Abu Dhabi’s galleries. From room to room, chapter to chapter, they collected artifacts from around the world and worked to demonstrate commonalities and shared themes. It showed that across all cultures, we are connected.

The mosque project was started by Sheikh Zayed bin Sultan Al Nahyan, a ruler of Abu Dhabi and a driving force behind the formation of the UAE. He is buried next to the mosque, and near him, a rotation of imams recite the Quran 24/7.

Throughout the mosque, I noticed the absolutely gorgeous detailing using marble, gold, semi-precious stones, crystals and ceramics. It’s one thing to admire a semi-precious stone in jewelry, quite another to be engulfed in iridescent designs. 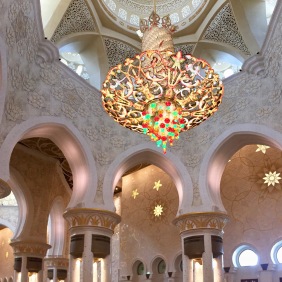 The interior was quite the sight: seven chandeliers, lined up in a row, bearing 40 million Swarovski crystals. Each chandelier had an interior staircase, so it could be cleaned by hand. The handmade carpet interior spans 60,000 sq ft for worshippers, and took 1,200 weavers about a year and a half to complete. It weighs 12 tons. The most prominent hue is green, Sheikh Zayed’s favorite color. Once it was installed, they realized they needed to help worshippers align themselves in neat rows. Rather than ruining the design by adding lines, they simply shaved subtle rows in the carpet; you can see them if you look closely.

Going from the still and silent Grand Mosque to the vibrant and roaring Grand Prix was quite the culture shock. My dad has worked closely with the Theodore Racing team for a few years, and in 2016 I went to the Indy 500 with their group. This year they were competing in the Formula 2 final race, with Charles Leclerc and Antonio Fuoco.

The Yas Marina Circuit is a huge course lined with party boats on the marina and massive spectator stands. We spent our time mostly with David Kennedy, who runs the racing team, and like my last trip, I learned a lot about the business of racing. Of talent scouting, of marketing, of financing, even of employee retention. Most of the big negotiations and deals get made at the VIP hospitality area, made of two-story bungalows that are bought out by racing teams, sponsors, vendors, and others. We grabbed a drink at one while eavesdropping on an F1 engineer get interviewed by the press at a nearby table. 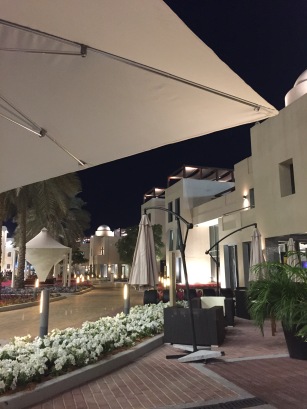 When it was time for the F2 final race to start, we made our way to the starting grid. As we rushed over, we walked past the F1 garages, which were in a league of their own compared to the F2 garages. While F1 cars have millions of dollars worth of engineering and R&D poured in, F2 cars are “spec” which means they can’t be altered.

The starting line was hectic and full of adrenaline, the same way it was at the Indy 500. While there, I always nerd out on the processes. How are the different roles collaborating? What decisions are the engineers making? How does information make its way back to the staff? I was lucky to watch the race next to David, who was listening to a radio of the engineers – he could tell us what risks they were choosing to take. 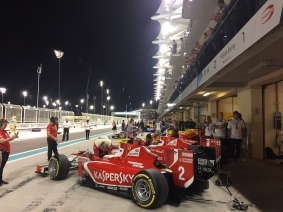 It was the most exciting race to watch, as our team’s LeClerc squeaked past the a competitor at the last second to clinch first place. It was an insane! What a way to cap off an amazing trip.

Ok, there was one more thing I was looking forward to on this trip: flying home on Emirates Business class. I’d never flown Business class internationally before, but if there was ever a time to do it – this was it. Not only was the lounge experience out of Dubai absolutely ridiculous, but we chose to fly the A380 because the aircraft had a bar and lounge area in the back. The bar was so much fun – we definitely spent a few hours hanging out fellow passengers. And then we (briefly) chatted with Busta Rhymes who was flying home after a show in Dubai.

Once I got home, my friends would ask, “How was your trip?!” And I’d tell them: “It was an insane adventure in a beautiful country. We were surprised every day with something unexpected, and had the best time.”